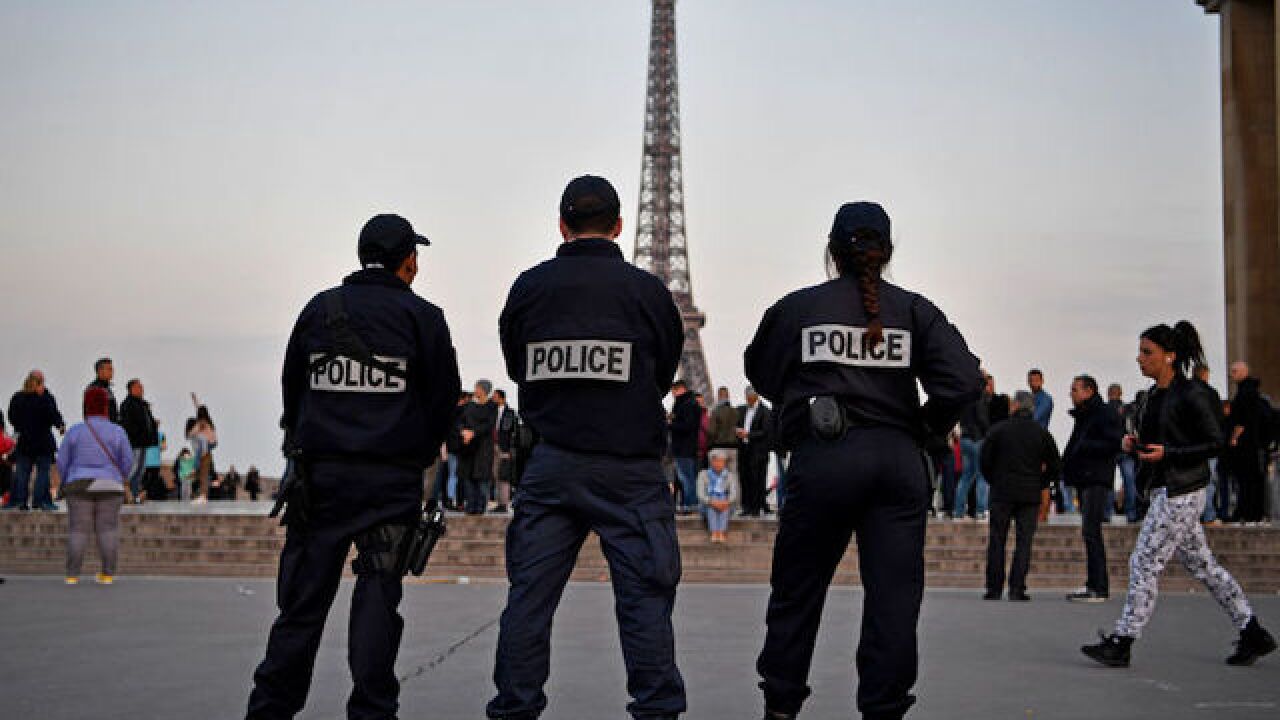 Image copyright 2017 Getty Images. All rights reserved. This material may not be published, broadcast, rewritten, or redistributed.
Jeff J Mitchell
<p>Police officers secure the Place du Trocadero in front of the Eiffel Tower the day after a gunman opened fire on police officers on the Champs Elysees on April 21, 2017 in Paris, France. </p>

French police are not characterizing a knife rampage in a popular Paris tourist spot as a terror attack, a French Interior Ministry spokesman told CNN.

Seven people were injured, including two middle-aged British tourists, in Sunday night's assault by a man wielding a knife and an iron bar, according to the spokesman.

"This is not being treated as a terrorist attack," he said.

The attack took place at 10:50 p.m. (4:50 p.m. ET) in the Parc de la Villette by the Ourcq Canal in the 19th arrondissement, a lively neighborhood in northeastern Paris popular with young people and tourists.

A bystander fought off the attacker with balls from a petanque game, a local kind of bowling, until police arrived.

Eyewitness Youssef Najah, 28, told Agence France-Presse he was walking along the canal near a bowling green when he saw a man running and holding a large knife.

"There were around 20 people chasing him. They started throwing petanque balls at him," Najah said. "Around four or five balls hit him in the head, but they weren't able to stop him."

According to the same witness, the attacker then dived into an alleyway, where the man "tried to hide behind two British tourists. We said to them: 'Watch out, he has a knife." But they didn't react."

The pair were then attacked, he said.

Sunday evening's attack was the latest in a stream of knife crimes in France recently.

On August 23, a man stabbed his mother and sister to death and seriously injured another person in a town near Paris before police shot him and killed him.

ISIS claimed responsibility for that attack, but French authorities said the 36-year-old had mental health problems and had been on their terror watch list since 2016.

Ten days earlier an Afghan asylum-seeker was arrested in the southwestern French town of Perigueux after wounding four people in a drunken rampage, AFP reported.

On June 17, two people were hurt in another southern town when a woman shouting "Allahu akbar" attacked them with a knife in a supermarket before being overpowered.

The previous month, a 21-year-old Chechen-born French citizen armed with a knife killed one pedestrian and injured several more near the Palais Garnier, the opera house in Paris, before police shot him dead.