Creighton baseball rallies from three down in 9th to beat Evansville 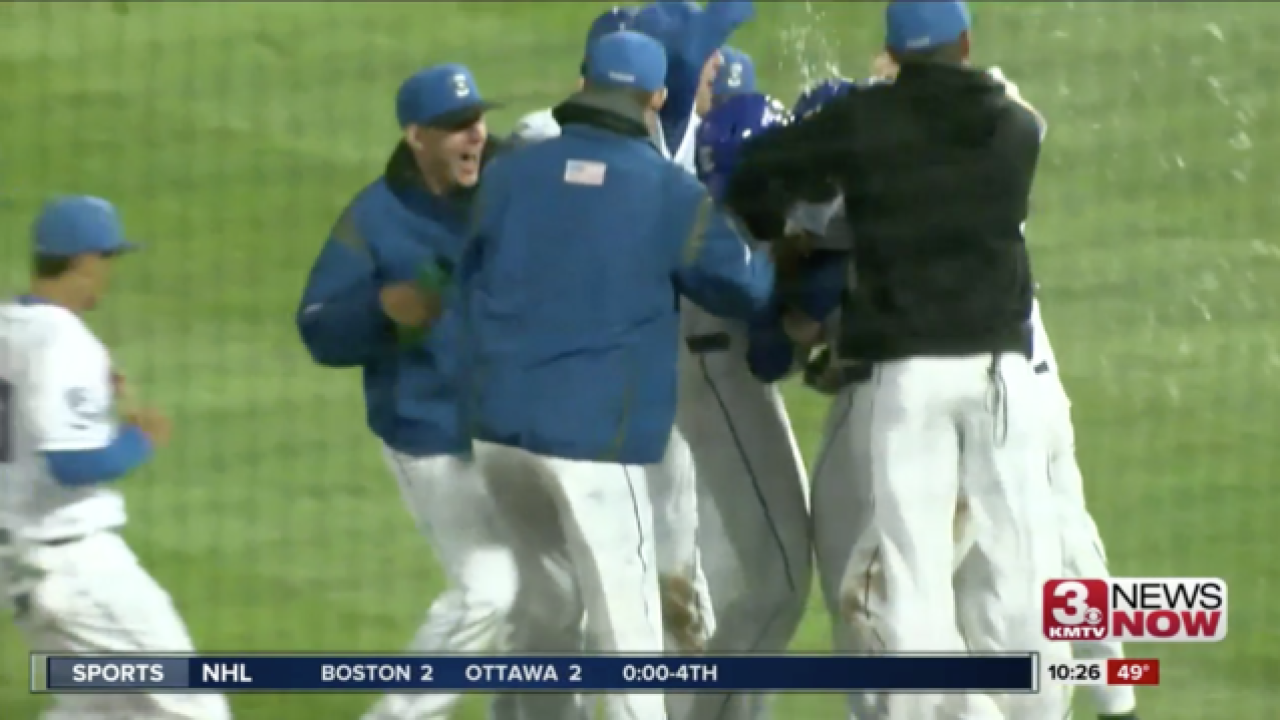 Omaha, Neb. -- Trailing 4-1 heading to the bottom of the ninth the Creighton Baseball team delivered a dramatic walk-off 5-4 win, capped by a bases clearing three-run double from junior Michael Emodi to down Evansville on Saturday, March 31.

The win lifted Creighton to 15-6 on the season, while Evansville dropped to 6-14 overall.

Sophomore Will Robertson put the Bluejays on top early with a solo home run to right in the bottom of the second, his fourth of the season.

Evansville answered with run in the fifth on a hit batter and two bunt singles to chase Creighton starter Denson Hull.

The Aces continued to attack in the sixth, taking the lead with two runs on three hits in the frame. Creighton freshman Ian Evans got the final two outs of the fifth, but surrendered a single, a double and a walk to open the sixth.

Evansville added a run in the eighth, plating another runner that reached on a hit by pitch.

Creighton's improbably comeback began with junior Ryan Mantle drawing a walk in a pinch hitting role to open the ninth. One out later sophomore Parker Upton brought the tying run to the plate by working the second walk of the inning.

After Evansville went to the bullpen for Ryan Brady, Creighton head coach Ed Servais countered by sending freshman Evan Spry to the dish for just the fourth time in the 2018 season. Spry showed his poise by working a walk himself to load the bases with just one down.

Leadoff hitter Clark Brinkman went down on strikes, but sophomore Isaac Collins picked up his teammate by blistering a ball off the left arch of Brady to bring Mantle into score.

Evansville was forced to go to the pen once more as Brady left due to the injury. The Aces brought in right hander Jimmy Ward to face Emodi.

After the Omaha native fouled off a pitch to move the knot the count at 1-1, Ward decided to go to the breaking pitch a second straight time.

Ward's slider, however, hung over the plate and Emodi made him pay with the game-winning three-run double off the center field wall.

Emodi's shot gave the win to junior Evan Johnson, who retired the only batter he faced in the top of the ninth to move to 2-1 on the season. Evansville's Ryan Brady fell to 1-2 as he took the loss, allowing two runs on a hit and a walk in one-third an inning.\

Emodi closed the game 1-for-5 with three RBI, while Collins and Upton each collected two hits in the Bluejays win.

The Bluejay and Aces are slated to close out their three-game series on Sunday, April 1 at 12:00 pm.

NOTES: The last time Creighton rallied from down at least three runs at home was on March 5, 2010. After Sam Houston State took a 5-2 lead with three runs in the top of the10th, the Bluejays plated four to earn a 6-5 win ... On the road the Bluejays pulled off a ninth inning rally last season as Creighton trailed Georgetown 9-5 heading to the top of the ninth only to win the game 11-9 on April 15, 2017.