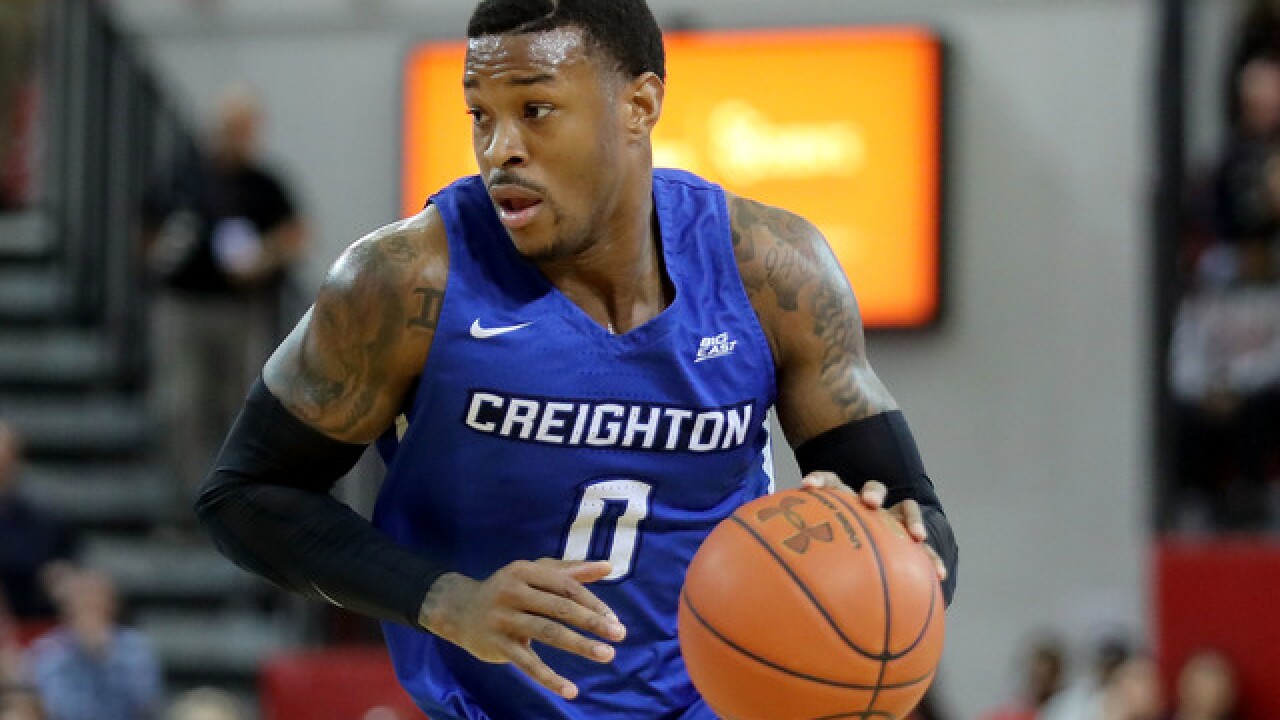 Image copyright 2018 Getty Images. All rights reserved. This material may not be published, broadcast, rewritten, or redistributed.
Abbie Parr
<p>NEW YORK, NY - JANUARY 23: Marcus Foster #0 of the Creighton Bluejays works towards the basket in the first half against the St. John's Red Storm during their game at Carnesecca Arena on January 23, 2018 in the Queens borough of New York City. (Photo by Abbie Parr/Getty Images)</p>

SPRINGFIELD, MASS. – Creighton senior Marcus Foster is among the five finalists announced today by the Naismith Memorial Basketball Hall of Fame for the 2018 Jerry West Shooting Guard of the Year Award. Named after Hall of Famer and 1959 NCAA Final Four Most Valuable Player Jerry West, the annual honor in its fourth year recognizes the top shooting guard in Division I men's college basketball.
Joining Foster as finalists for the 2018 Jerry West Award are Jerome Robinson (Boston College), Grayson Allen (Duke), Kendrick Nunn (Oakland) and Carsen Edwards (Purdue).
Two days ago Foster became the first player in program history to earn First Team All-BIG EAST honors twice. The senior from Wichita Falls, Texas, leads Creighton with 20.3 points per game while also adding 3.8 rebounds and  2.7 assists per game. Foster topped the BIG EAST Conference with 145 field goals made in league play. He's scored 10 or more points in 30-of-31 games this season and in just two seasons has moved into the top-25 in school history with 1,268 points as a Bluejay. Foster also joined Bob Portman and Doug McDermott as the only Bluejays to ever post multiple seasons of 600 or more points. Foster was named a Midseason All-American by Sporting News and has also has been a candidate for the Naismith Trophy, Wooden Award and Senior CLASS Award.
The winner the 2018 Jerry West Award will be honored at ESPN's College Basketball Awards presented by Wendy's in downtown Los Angeles on Friday, April 6, 2018. Additional awards being presented include the Bob Cousy Point Guard Award, the Julius Erving Small Forward Award, the Karl Malone Power Forward Award and the Kareem Abdul-Jabbar Center Award. Broadcast information will be released at a later date.
A national committee of top college basketball personnel including media members, head coaches, sports information directors and Hall of Famers narrowed the original watch list of 20 players down to 10 candidates and now just five finalists. This month, the five finalists will be presented to Mr. West and the Hall of Fame's selection committee. The winner of the 2018 Jerry West Shooting Guard of the Year Award will be determined by a combination of fan votes and input from the Basketball Hall of Fame's selection committee. Fans are encouraged to visit www.HoophallAwards.com [hoophallawards.com] to cast their votes March 9-23.
"For several decades I've been involved in the game as a player, coach and executive which has allowed me to watch a number of young athletes compete," said Jerry West. "I truly enjoy observing collegiate athletes and these five finalists are in an elite class. I look forward to seeing them give their best efforts and performances this postseason."