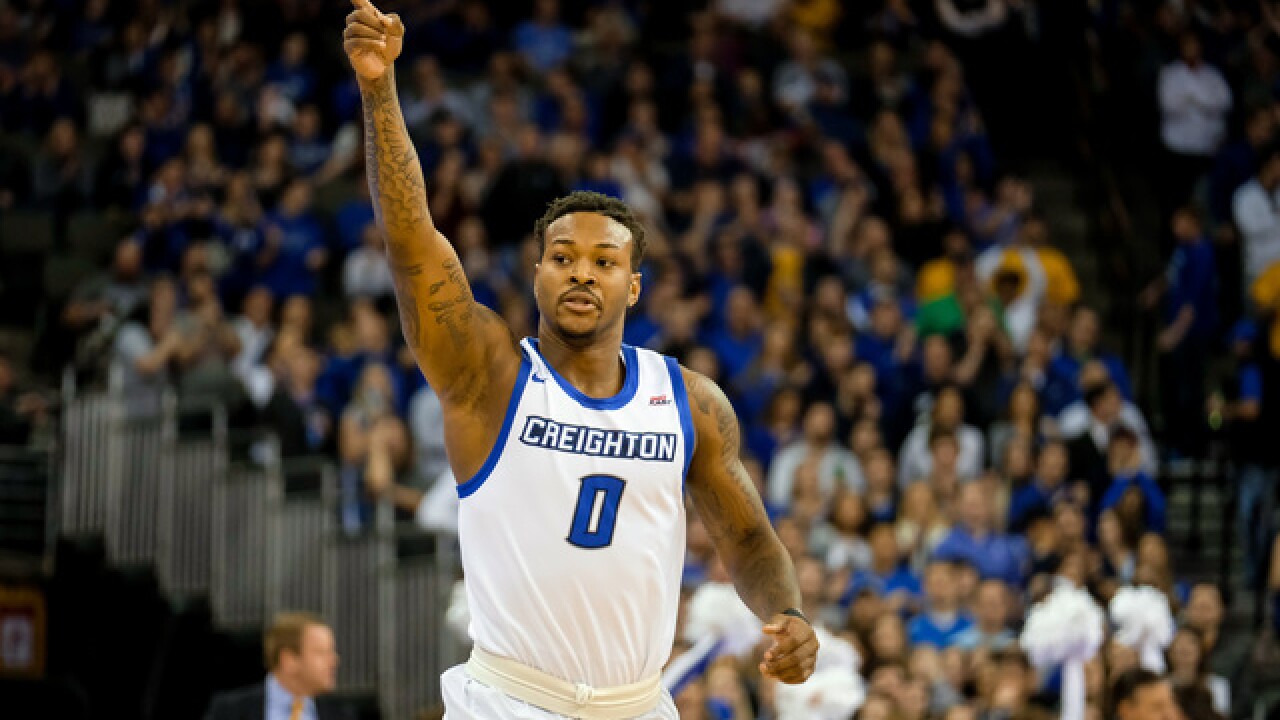 Copyright 2017 Scripps Media, Inc. All rights reserved. This material may not be published, broadcast, rewritten, or redistributed.
Eric Francis
<p>OMAHA, NE - JANUARY 21: Marcus Foster #0 of the Creighton Bluejays reacts during their game against the Marquette Golden Eagles at CenturyLink Center on January 21, 2017 in Omaha, Nebraska. (Photo by Eric Francis/Getty Images)</p>

Creighton guard Marcus Foster has been selected as one of 20 seniors who will participate in the 2018 Reese's® College All-Star game, which will be played on Reese's Final Four Friday®, March 30, at the Alamodome as part of the 2018 NCAA® Men's Final Four® in San Antonio.  Reese's® brand is the official candy partner of the NCAA.

Friday's Reese's® College All-Star game airs at 3:35 p.m. on CBS Sports Network and is part of a busy week for Foster, who will also participate in the 30th Annual State Farm College Slam Dunk & 3-Point Championships on Thursday night. That airs on ESPN2 at 8 pm CT.

A senior from Wichita Falls, Texas, Foster became the first player in program history to earn First Team All-BIG EAST honors twice. He led Creighton with 19.8 points per game while also adding 3.9 rebounds and  2.7 assists per game. Foster ranks 47th in the nation this year in both three-pointers per game (2.88) and three-point percentage (.413), as well as 51st in three-pointers made (95). He scored 10 or more points in 31-of-33 games this season and in just two seasons finished 21st in school history with 1,292 points as a Bluejay. Among active Division I players, Foster ranks tied for 10th nationally among active players with 306 career three-pointers.

Foster also joined Bob Portman and Doug McDermott as the only Bluejays to ever post multiple seasons of 600 or more points. Foster was named a Midseason All-American by Sporting News and remains one of five finalists for the Jerry West Award, given to the nation's best shooting guard.

Creighton finished the season with a 21-12 record and second straight trip to the NCAA Tournament. The Bluejays are coached by Greg McDermott [gocreighton.com].

The complete rosters were announced today by the National Association of Basketball Coaches (NABC) today and also features a unique battle between brothers as coaches.

Yale head coach James Jones will face off against his brother, Boston University head coach Joe Jones, in the game, which is set for a 3:35 p.m. CDT start and will be televised live on CBS Sports Network. The Reese's® College All-Star game features two 10-man teams composed of some of the finest seniors from NCAA Division I.

James Jones, the Ivy League Coach of the Year in both 2015 and 2016, is one of the most successful coaches in Ivy League history. Jones' 159 Ivy victories and 288 overall wins are both the third most in league history.

Having just completed his 19th season at Yale, James Jones is the longest tenured coach in the Ivy League. He is the winningest coach in school history, having surpassed Hall of Fame Coach Joe Vancisin, who led Yale to 204 victories, when the Bulldogs beat Holy Cross on Mar. 22, 2014.

In 2015-16, James Jones guided the Bulldogs to the most successful season in school history. Yale won 23 games, the most since 1906-07 and captured a second straight Ivy League title with a 13-1 record, matching the 1961-62 team for the best in school history. Yale advanced to the NCAA Tournament for the first time in 54 years where the Bulldogs upset Baylor to earn the first NCAA Tournament victory in Yale history.

Joe Jones, the younger of the brothers, just completed his seventh season as head coach of the Terriers and has a record of 122-102. During his tenure, he has led BU to a Patriot League regular season title in 2014 and second-place finish in both the 2017 Patriot League and 2013 America East regular season.