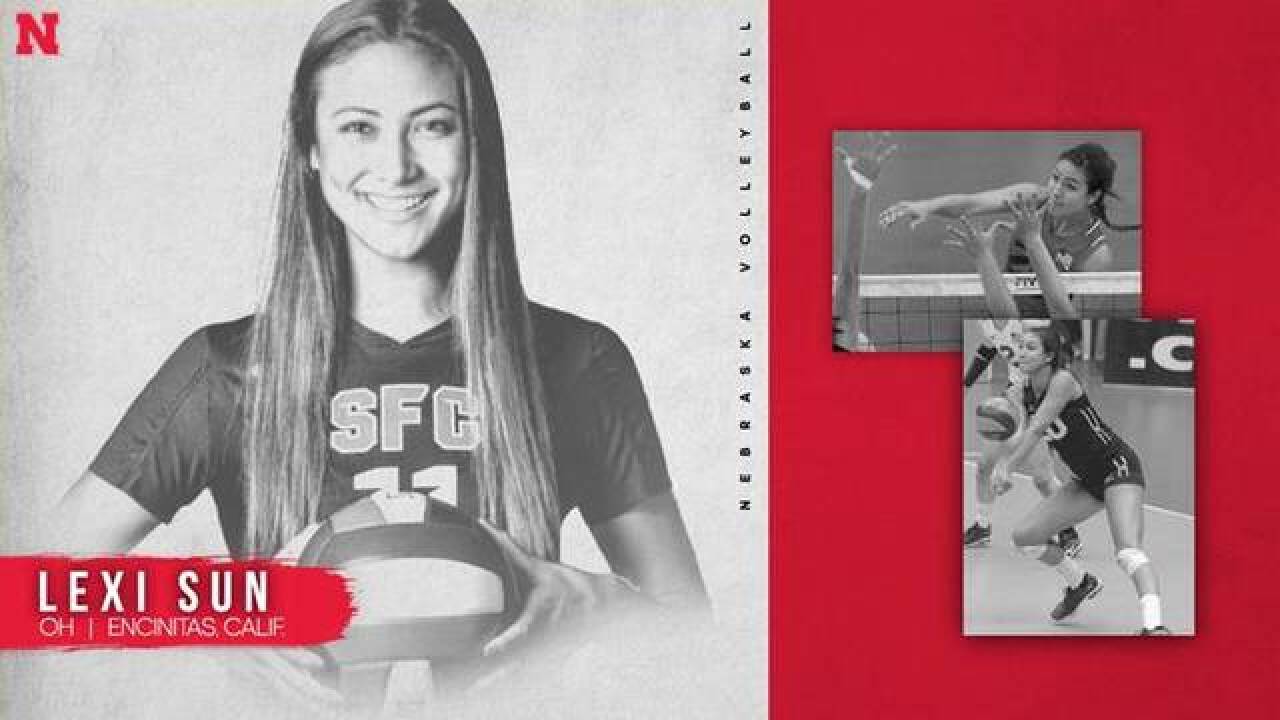 Nebraska volleyball head coach John Cook announced on Tuesday that 6-2 outside hitter Lexi Sun, a unanimous first-team All-Big 12 selection as a freshman at Texas in 2017, will transfer to the Husker program. Sun, who will be a sophomore next season, will be eligible to compete immediately.

A native of Encinitas, California, Sun was the top-ranked recruit in the nation by PrepVolleyball.com coming out of high school. After announcing her intention to transfer from Texas, Sun visited Nebraska, Wisconsin and USC before signing with the Huskers. She will join the program in May or June for the start of summer classes and conditioning.

“Lexi really provides depth at the outside hitter position, where we’re a little thin,” Cook said. “What I like most about her is her commitment and desire to be a great player. She has big dreams and goals at Nebraska and beyond Nebraska. She’s somebody that we want to develop into a six-rotation outside hitter, and she knows that’s the key for her to play international volleyball someday. She’s a 6-2, physically gifted athlete with a tremendous work ethic. I really admire that when she plays, you can see her passion and enjoyment for playing the game of volleyball. She’s always smiling, and she loves what she’s doing.”

Sun helped the Longhorns win a Big 12 title and reach the NCAA regional finals in 2017. She averaged 3.27 kills per set and was second on the team with 337 total kills. Sun received AVCA All-America honorable mention, was a unanimous first-team All-Big 12 selection and All-Freshman Team member. She served 18 aces and had 151 digs and 65 blocks. Sun had a career-high 21 kills twice last season, and she had four double-doubles in her freshman campaign.

“After visiting Nebraska for the first time, I found that overall the program is the best fit for me when taking into consideration what the entire program has to offer,” Sun said. “I cannot wait to be a part of the enthusiastic Husker volleyball family and am so excited to experience it with my new teammates very soon. I want to thank my family, whom I consider my number one support system. I am so thankful to have them by my side in this journey. We all can’t wait to be Huskers.”

Cook recruited Sun while she was in high school, but Sun committed to Texas as a sophomore while at Santa Fe Christian School.

“My grandmother, who would’ve been about 95 years old at the time, when I would go to visit her in San Diego she would have these articles laid out on the table and would say ‘Are you recruiting this Lexi Sun girl? You need to. She needs to be a Husker,’” Cook said. “We tried to recruit Lexi, and we had some nice conversations, but she didn’t end up visiting. I’ve always had this funny feeling that at some point we might have another chance to recruit her to Nebraska, and when she came on a visit three weeks ago it was unbelievable. She got to meet Dr. Kathy Farrell, the dean of the business college, because Lexi wants to major in business. Then she met with our performance team and they did a great job. Then Scott Frost and Matt Davison showed up while we were at dinner with Lexi and her family and some of the Huskers, which was really cool. It fired up Lexi’s family and all the Huskers. Scott’s pumped she’s coming here. We’re all pumped she’s coming here.”