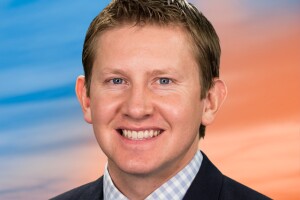 Adam has been the Sports Director at 3 News Now since August of 2016. In that time, he has covered the hiring of Scott Frost & Fred Hoiberg, as well as multiple NCAA Volleyball Final Fours, NCAA Men's Basketball Tournaments & the College World Series.

Prior to KMTV, Adam covered the Huskers for over four years as the Weekend Sports Anchor/Reporter at the CBS in Lincoln. He covered the firing of Bo Pelini, the hiring of Tim Miles and many other important stories in NU & high school athletics. Adam is passionate about the local sports scene and enjoys telling the compelling human interest sports stories across the community.

When he is not covering the local sports scene, Adam enjoys spending time with his family, going bowling, playing tennis & cards. He graduated from the University of Nebraska-Lincoln in 2005. He has a wife, a daughter, and a beagle named Kobe. If you have an idea for a sports story, please email him at adam.krueger@3newsnow.com