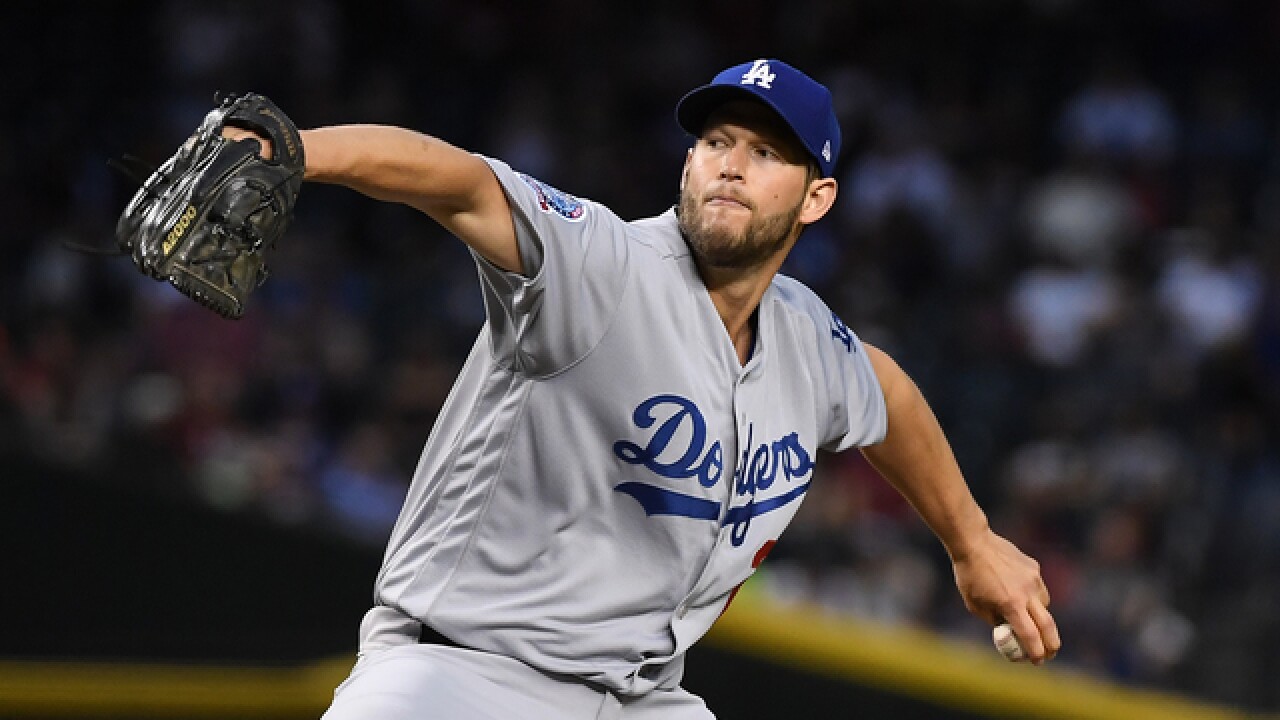 Poll almost any baseball fan, and those are likely the three teams you'll get if you ask which clubs weill standout in the National League. And those fans are likely correct. Washington, Chicago, and Los Angeles have a leg up in their respective divisions.

Yet, upsets happen all the time in Major League Baseball, and there's still those two pesky wild card teams to consider.

Here's a look around the senior circuit, along with what to expect in 2018.

The biggest thing holding Washington back this year? Probably the fact they're the Nationals. When one examines the track record, its not hard to discover the Nats have been in this position several times before, and have fallen flat.

Unlike previous years, there will be extra urgency in Washington with Bryce Harper's contract expiring, and the potential he could seek fortunes elsewhere after the season. In reality, Washington is the best team on paper in the NL East by close to ten games, with catcher (barring a bounce back year from Matt Wieters) and perhaps a fifth starter being the only real question marks. As long at the Nationals stay healthy, there's no reason to think they won't emerge on top.

The Mets should fall in line after Washington and could have a shot to contend for a wild card spot. New York will rely on their (potentially) nasty 1-2-3 punch of Noah Syndergaard, Jacob deGrom, and Matt Harvey to lead the way, and feature an underrated lineup that should be better after offseason improvements. Health of the rotation will be key here.

The Phillies have tremendous boom or bust potential entering 2018. If Jake Arrieta turns out to be his 2016 self, things look pretty good at the top of the rotation. Was breakout rookie Rhys Hoskins' 2017 a fluke, or a sign of big things to come? Will new manager Gabe Kapler continue to use 21 pitchers over a three game span, or was that just a blip on the opening weekend radar? Lots of questions here, but the Phillies will have a chance to finish above .500 for the first time since 2011.

The Braves are another team with tremendous boom or bust potential, but a club whose best days are likely ahead. 2018 for Atlanta will be about sorting out which of their seemingly hundreds of top end pitching prospects will ultimately figure into the long term plan, and the arrival of top prospect Ronald Acuna sometime in late April. By the end of 2018, most of the kids should be up in the bigs filling position spots. Look for the Braves to be active at the deadline, and to make a splash next winter in free agency. Their time is coming, but not quite yet.

As for the Marlins...well, where to begin. Derek Jeter came in and traded away virtually every valuable piece the club had. ETA for the dividends may push into the 2020's, but brighter days are ahead. In the meantime, the 1962 New York Mets lost 120 games...I'll just leave that out there.

Talk around the NL Central will no doubt revolve around the Windy City in 2018. And it should. The Cubs' World Series hangover (a very real thing) is over, and the team should once again be among the NL's elite.

The offseason acquisition of Yu Darvish replaces the void left by Arrieta's departure, and backing him up with Jon Lester, Tyler Chatwood, Kyle Hendricks, and Jose Quintana makes for one of the NL's top rotations. The lineup is loaded as well, with two small question marks: Will Kyle Schwarber settle into left field and find some consistency at the plate (he's a career .221 hitter), and will Jason Heyward cease to be a black hole offensively? If even one of those falls into the "yes" category, it's hard to imagine anyone touching Chicago this year.

That said, the rest of the division won't be terrible. Both St. Louis and Milwaukee have a chance to claim wild card spots in 2018.

The Brewers made some meaningful moves in the offseason, signing Lorenzo Cain as a free agent, and trading for Christian Yelich from the Marlins. Both will be significant upgrades to a team that's already been quietly adding pieces over the past few years. The biggest question mark might be where Ryan Braun fits in long term (remember him?). He'll see real time at first base early on, and could end up playing all over the place. Once ace Jimmy Nelson returns from injury in June, he should anchor the top of the rotation.

St. Louis hasn't been to the postseason since 2015, which feels like an eternity after a decade of success. A rebuilt outfield features Dexter Fowler and Marcell Ozuna, along with plenty of depth. The biggest question facing the Cardinals will be the strength (and health) of the rotation. Carlos Martinez sits on top, with Michael Wacha (shoulder issues in the past), Luke Weaver (young buck), Adam Wainwright (already on the DL), and Jack Flaherty (just 22 years old) backing him up. Lots of questions, but plenty of upside. If things break right, St. Louis has a shot.

Pittsburgh seems to be caught in a reloading/rebuilding/bridge year that could be one of the more trying in recent memory. Andrew McCutchen and Gerrit Cole are gone. That's a tough place to start. Gregory Polanco and Tyler Glasnow had huge boom potential in the past, yet have largely been busts thus far. Starling Marte got busted for PED's in 2017, and then had no power when he came back. There are a bunch of young guys playing for this team that most people have never heard of. There's a lot of room for boom, and lots of room for bust.

Cincinnati is in the middle of a rebuild campaign that could start to pay dividends this year, but not enough to make them a contender. At least with Billy Hamilton and Joey Votto still around, there's some exciting offensive pieces to keep things interesting.

A lot of people may have forgotten, but this division fielded BOTH wild card teams in the NL in 2017. That makes it the most difficult division to forecast this year, aside from the team that will likely finish on top: Los Angeles.

The Dodgers have the top pitcher in the game (Clayton Kershaw), one of the top three closers (Kenley Jansen), one of the best young players in the game (Corey Seager), and a dude who just set the rookie record for home runs in a season (Cody Bellinger). And that's just for starters. The kids are all grown up, and its hard to see what will stop LA from winning the NL West for the sixth consecutive season.

The rest of the division is a real crap-shoot.

Colorado earned a wild card spot in 2017, and feature (amazingly enough) some pretty good pitching. The addition of Wade Davis will serve as an upgrade at the end of the bullpen. Nolan Arenado and Charlie Blackmon were among the best 1-2 punches in the bigs last year, and if 2018 proves to be a repeat performance, the Rockies could once again figure into the the wild card picture.

Arizona is a team that snuck up on people in 2017, but the biggest difference maker of last year, JD Martinez (who was added near the deadline), is gone. Paul Goldschmidt is still a yearly MVP contender, but replacing Martinez with Jarrod Dyson and Steven Souza...just isn't quite the same. In the rotation, if Robbie Ray can repeat on his Cy-Young caliber 2017 season, the 1-2-3 of Ray, Zack Grienke, and Taijuan Walker is a great place to start.

The Padres are in the middle of a hard-core rebuild, yet made the interesting decision to sign Eric Hosmer to a nine-figure deal in the offseason. Seems like a move to not only add on-field production, but bring some veteran leadership to the clubhouse. Chase Headley is also back in town at the hot corner, but beyond that - it's not a lineup that inspires a lot of fear. Manuel Margot will bat leadoff, and  has tremendous upside. The biggest thing going for San Diego is a consensus top three farm system that will pay big dividends down the road.

The Giants - ah yes, the Giants.

A team with a recent history of coming out of nowhere to win the World Series.

San Francisco also managed to make some pretty splashy upgrades in the offseason: Evan Longoria, Austin Jackson, and Andrew McCutchen all now reside in the Bay Area. Mix them in with some of the more familiar faces (Buster Posey, Hunter Pence, Brandon Crawford, Brandon Belt), and there's a ton of upside in the lineup.

Same goes for the rotation. Although Madison Bumgarner is already out injured, the 2-4 of Johnny Cueto, Jeff Samardzija, and Ty Blach is nothing to sneeze at. The Giants don't have much of a farm system to provide help, so they'll need to limit injuries and hope the splash moves pay off. If they do, it wouldn't be crazy to see this team in the mix for a wild card spot.