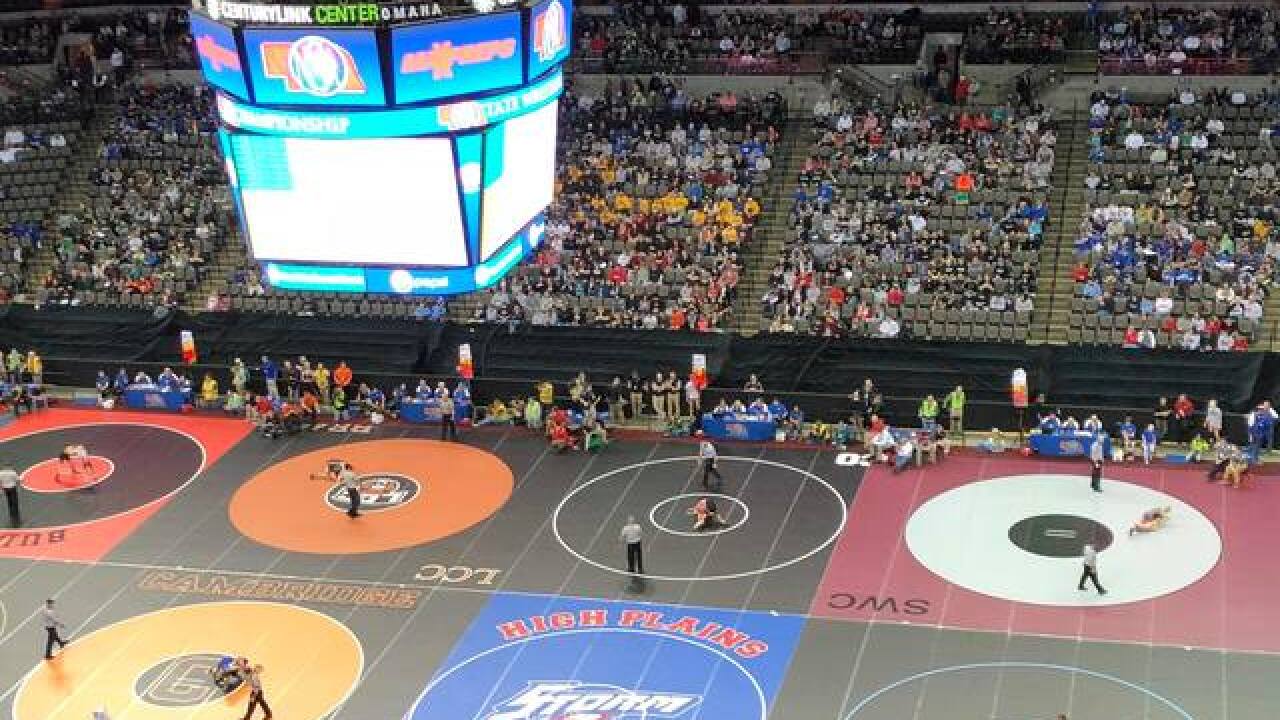 Looking for updates on Saturday's finals matches? Head on over here.

Here are the Class A team standings heading into the semifinal matches Friday.

Hear from Millard South's Blake Jackson as he talks about what he's learned from his past state title appearances on his way to the semifinals.

Millard South's Blake Jackson talks about what he has learned from a previous state title and runner-up finish and what he does to prepare for his match. @PatriotsWrestle @MSHSactivities @Blake12Jacksonhttps://t.co/5IUWEp0ngA pic.twitter.com/3dxW33zHnJ

Hear from Omaha Burke's James Burks after he notched his 150th career win on his way to the state semifinals Friday.

Update 7:08 p.m.: Omaha Central's Deon Davis is on to the semifinals at 138-pounds as a freshman after a win over Omaha Benson's Curtez Riley in the quarterfinals.

Bellevue East's Derek Wagstaff won a shocker by pinning Omaha North's Ronniel Wells, who won the state championship at 138 last year, in the 145 pound quarterfinals. Wagstaff will advance to the semifinals Friday.

Papio-La Vista's Cody Niemiec secured a spot in the semifinals of the 120 pound weight class after a 4-2 win over Millard South's Conor Knopick in the quarterfinals. Niemiec took home third at 106 in 2017.

Millard West's Camden Russell is on to the semifinals with a dominant win in the quarterfinals. Russell placed fourth at 106 in 2016.

Millard South's Blake Jackson just secured his 150th career win as a junior.. Jackson is on to the semifinals at 113 and in search of his second consecutive state championship. Jackson won state at 106 last year and was a runner up as a freshman at 106 in 2016.

Class A first round updates

James Burks of Omaha Burke grabbed his 150th career win and is on the road to a third-straight state championship, this time in the 160-pound weight class. Burks won state at 145 pounds in 2017 and 132 pounds in 2016.

North Platte's Braiden Ruffin is on his quest for a third-straight state championship at the 170-pound weight class after a first round win.

Garret Svoboda from Millard South notched his first win of the 2018 Wrestling Championships with a 12-4 win over Fremont's Mason Reiger. The Patriots sit in fourth place in the team standings with 12 points.

Omaha North's Ronniel Wells is on his quest for back-to-back state championships as he pinned Cade Fullner of Columbus in his first round match. Wells took home first place in the 138-pound weight class in 2017.

Papillion-La Vista's Nolan Niemiec came away with a 12-0 victory over Preston Mort of Lincoln Northeast in the first round to advance to the semifinals. Niemiec placed third in the 113-pound weight class in 2017.

Millard North sophomore Peyton Meink pinned Lincoln Southeast's Taye Hill in their first round match to advance to the semifinals.

Millard West's Camden Russell will wrestle in the quarterfinals later this afternoon after a 9-0 win over Rylie Steele from Kearney. Russell placed fourth at the 106-pound weight class in 2016 for the Wildcats.

Omaha Bryan's Ladamien Sturdivant is on to the quarterfinals after a 9-0 victory over Tanner Kobza of Columbus. Sturdivant was the runner-up in the 106-pound weight class in 2017 as a sophomore.

Millard North freshman Solomon Allerheiligen also grabbed a victory in the 113 pound division in the first round over Lincoln Southwest's Jaxon Morrow 12-7.

Class B and C Quarterfinal Updates

Hear from Omaha Skutt's Nicholas Stoltenberg and Alex VanDyke as both will advance to the semifinals Friday.

Now that the quarterfinals are in the books, here's a look at the team standings in Class B:

Blair's Dalton Lewis is on to the state semifinals after an 11-8 victory in the quarterfinals over Northwest's Blake Westerby.

Omaha Skutt's Alex VanDyke is on to the state semifinals after coming away with an 11-1 win over Zane Bennet from Wahoo.

Derek Robb from Sidney picked up his 200th win on his quest for a fourth straight Class B state championship and will advance to the semifinals Friday.

Caleb Lazure from Omaha Skutt will advance to the semifinals after pinning Drew Arnold from Beatrice in the first round of the quarterfinal match. Lazure won state at the 106-pound weight class as a freshman in 2017.

Class B and C first round updates

After the first round of action in Class B, here's the top five teams in scoring:

Cedric Relford, a junior from Elkhorn High School, started his state tournament off with an 18-7 major decision over Chadron's Clark Riesen.

Billy Higgins (14-1) from Omaha Skutt also won with a first-period pin over Tyler Pester of Norris in the 170 pound weight class.

Derek Robb of Sydney also started his quest for a fourth-straight state title in Class C with a pin in the first round.

Earlier in the morning: Omaha Skutt Catholic's Caleb Lazure picked up a win by technical fall in the 113 pound weight class. Lazure came into the tournament with a 28-6 record.

In the Class B 120-pound weight class,  Ralston's Noah Talmadge will advance to the quarterfinals after a first round win over Cozad's Jace Russman, and Mount Michael Benedictine's Jarrett Cline grabbed a 10-3 win over Bennington's Robert Greenwood.

Connor Drahota (10-11), a sophomore from Elkhorn High School, grabbed a win in the first round over Columbus Lakeview's Joel Lemburg (32-6). Drahota won in a close 6-5 decision.

Devin DeLancey of Bennington wins by a major decision over Hunder McClain from Blair in the 138 pound weight class. DeLancey came into the state tournament with a 32-7 record on the season.