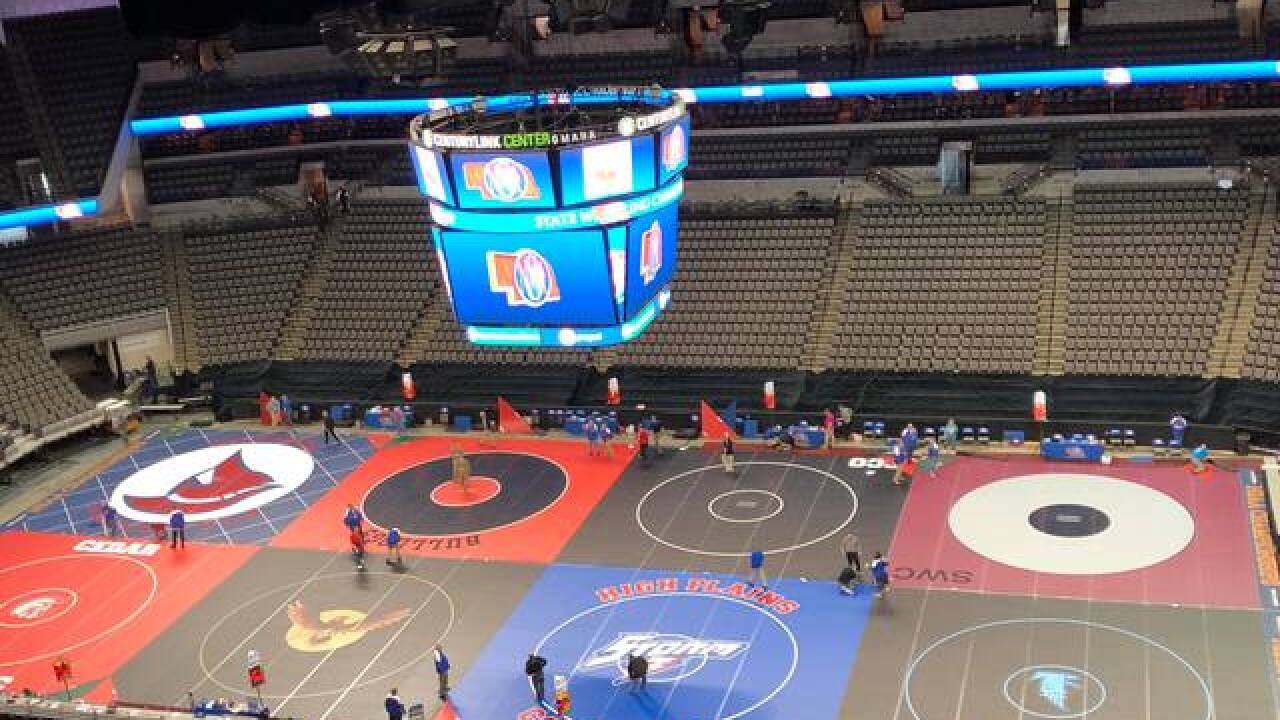 Copyright 2018 Scripps Media, Inc. All rights reserved. This material may not be published, broadcast, rewritten, or redistributed.
<p>We're down to eight mats for Friday night's semifinals in the 2018 NSAA Wrestling Championships. </p>

Looking for highlights from the Finals matches? Head over here.

Bellevue West's heavyweight Ty Reynolds will advance to the Class A 285 title match as he defeated Norfolk's Conner Cowling 2-1.

Omaha Burke's Dillyn Miller is on to the Class A State Finals at the 195 pound weight class after pinning Kearney's Sean Jackson.

Another Skyhawk is on to the finals as Omaha Skutt's Billy Higgins came away with a 20-4 win in the 170-pound Class B semifinals.

Gretna's Lance Jarrett is on to the finals after an impressive win, pinning Papio South's Trajen Linear in the first 18 seconds of the 182-pound semifinals match.

Over in Class B, Omaha Skutt's Alex Van Dyke is moving on to the finals after defeating Bennington's Logan MacDonald in the 160-pound semifinals 6-2.

Omaha Skutt currently leads the Class B team standings, but there's still plenty of wrestling to do.

Omaha Burke's James Burks is on his one match away from his third-consecutive state title after defeating Omaha Northwest's Dorian Franklin 9-1 in the semifinals of Class A's 160-pound division.

Burks won state at 145 pounds last year and at 132 pounds in 2016. His brother, Jakason Burks, will also wrestle in the state finals at 106 pounds.

Millard South's Isaac Trumble is on to the finals in the Class A 160 pound division after pinning Gretna's Cody Everhart in their semifinal match.

Gretna's Tyler Cunningham won a thriller in the 138 pound Class A semifinals as he defeated Deon Davis 11-10 to advance to take on Kearney's Nick James in the state finals.

Kearney's Nick James stunned Lincoln East's Adam Kinnaman in the semifinals at 138 pounds. James trailed 6-4 with just 20 seconds left, shot and was awarded a takedown to tie things up at six, and finished it off with a pin before the time expired.

Another Millard West Wildcat will make an appearance in the Class A State finals as Jack Huffman will look to grab his second state wrestling championship, this time at 132 pounds.

Huffman defeated Corbin Sindel of Lincoln Northeast in the semifinals 10-0. Huffman was the runner-up at 120 pounds last year and won his finals match at 113 pounds in 2016.

Omaha Skutt Catholic's Nicholas Stoltenberg is headed to the state finals after picking up a win over Walker Moore from Blair in the Class B semifinals at 126 pounds.

The match went to two overtime periods, but Stoltenberg escaped for the win.

Millard West's Camden Russell is moving on to the state finals at 120 pounds after defeating Fremont's Cody Fielder 2-1 in the semifinals. Russell will look to add another medal to his case as he took home fourth place at 106 in 2016.

Omaha Bryan's Ladamien Sturdivant is on his way to the state finals at 113 pounds after defeating Emilio Haynes from Omaha Central in the semifinals 8-5. Sturdivant was a runner up at 106 pounds in 2016.

Freshman Caleb Coyle of Millard South is on his way to the state finals at the 106-pound division after defeating Clay Cerny of Columbus.

Heading into the semifinal round, here's a look at the top ten teams in scoring in classes A and B: