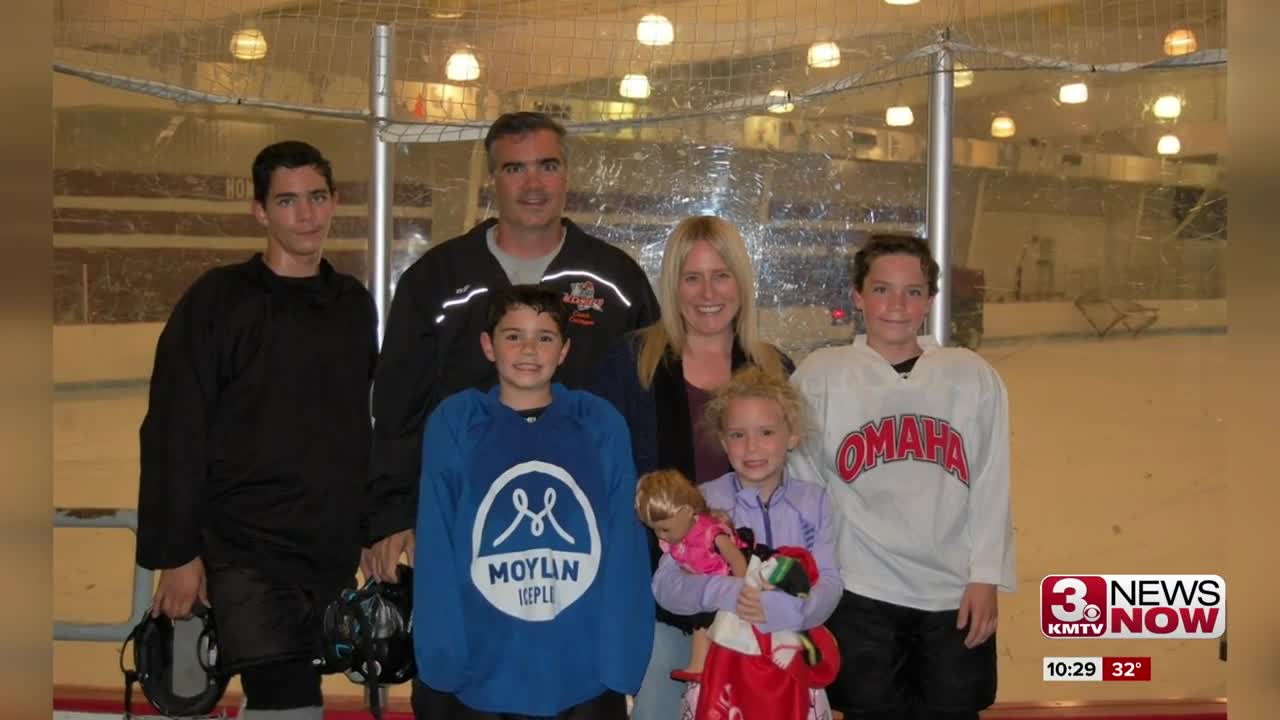 The three Cacioppo brothers on the Creighton Prep hockey team honor their late father, who taught them the game.

OMAHA (KMTV) — A pair of brothers taking the ice for the same team isn't that uncommon. But three brothers on the same high school hockey team doesn't come along often.

When Natalie Cacioppo watches her three sons play together for Creighton Prep, it means more than just a sporting event.

"It had a big emotional impact that I didn't expect." said Natalie.

"I think it means a lot especially to the people watching, like our family," said Prep freshman & youngest brother Sebastian Cacioppo.

Salvatore, a senior, Vincent, a junior and Sebastian, a freshman, were all taught the game and coached by their dad, Tim.

"He loved it," said Natalie. "Hockey was his number one love."

"He would be coaching our boys on the bench and his hands started to freeze up," Natalie said.

At age 43, Tim was diagnosed with ALS, a fatal neurological condition also known as Lou Gehrig's Disease. The condition would eventually force him into a wheelchair, but wouldn't stop him from watching his boys play hockey.

"When he couldn't talk anymore, he had a speech device," said Natalie. "He preloaded sayings for the referees: 'Ref you need glasses!' And he played it over and over and over."

"Starting out, I didn't react what the way I should've down the road," said Sal. "I should've helped him out a lot more."

"I'll never forget the time when I walked into the rink and he's standing in the back and he had tears coming down his cheeks," Natalie said. "I asked him what is going on, and on the ice there was a high school game before our boys game and he said 'I'm never going to see this.'"

The father of four lived for nearly three and a half years following his diagnosis until October 16, 2016 when 46 year old Tim Cacioppo passed away at his home just two weeks before Sal's first high school game.

"He had so much support and just an inspiration and he lived everyday like just any other day," said Natalie.

While some memories of their dad may have faded, the brothers' resolve never wavered when asked if they ever considered giving up the sport after Tim's passing.

"Not at all," said Sebastian.

"Hell no!" said Vincent. "Hockey, that's our sport as Cacioppos. He taught it to us."

Tim also tried to get his daughter and youngest child, Anna, to take up the sport.

"She finally decided to give it a try," Natalie said. "She fell in love with it. And I'll never forget the day, she was in the locker room a few months after he had passed away, she says 'Mom do you think Dad is proud of me?' I said 'oh yeah. he's watching, smiling right now.'. And she says 'I wish I would've done this before he died.' It's been a transition for sure. They don't have a dad but I'm so proud of all of them."

"Life doesn't stop," said Vincent. "It keeps on going. i know he's watching over every single game. He wouldn't miss it for the world."

Creighton Prep beat Millard West on Wednesday, 3-0. The Junior Jays will play Elkhorn on Sunday at 4 p.m. on the main ice at Baxter Arena. If Prep wins, the two teams will play again on Monday night for the state championship.