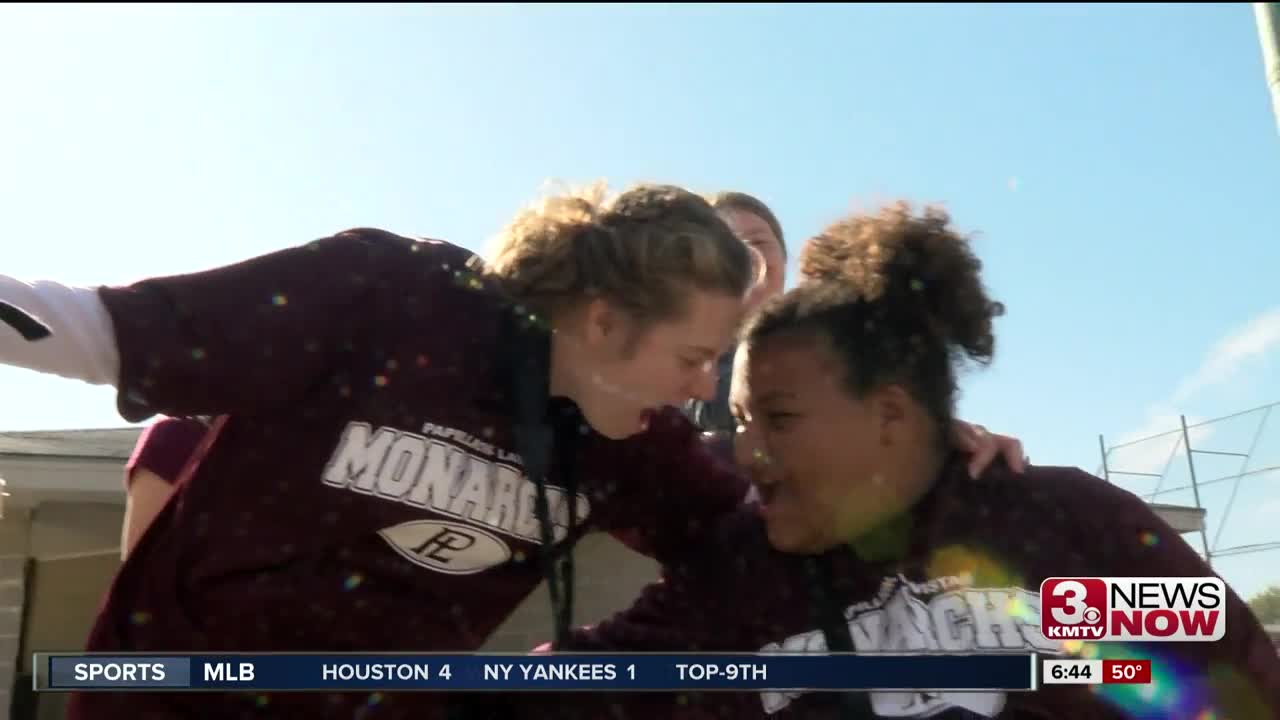 LA VISTA, Neb. (KMTV) — As Papio softball swings away at a state title this week, the crown the Monarchs have earned as friends to Emma Eberhart & Delaney Van Briesen will mean more than any gold medal they might earn on the diamond.

"My first reaction as a parent was visions of my child being alone," said Emma's mom, Teresa Eberhart. "But that's not been the way it's happened in her life because we've been very cognizant of making sure that Emma is included in many things. And so that vision that I had when she was first diagnosed, not wanting her to be alone is not happening in her life so that's really exciting and it's because of people like the girls on the softball team."

The Monarchs got to know the girls by hosting a fundraiser for them last year. And ever since, Emma & Delaney have been a hit with the team.

"I think some of the coolest things that happen in sports and when it happens unintentional," said Papio head coach Todd Petersen. "And it really was unintentional. Like we did the fundraiser but they became part of the team. It's really a cool thing because it makes it more than just sports."

"They're just always happy," said junior outfielder Jenna Kramer. "They always bring the energy up. We do stuff with them outside of softball all the time. It's just so good to be around them. You know you can't even really explain it. There's not really words to explain how much light they bring to everybody's life."

"My friends on the team are funny and nice," said Emma through her electronic device.

"Everybody wants their child to belong and to belong to something that's meaningful," Teresa said. "And that's definitely been that for Emma & Delaney."

Last year, Papio was upset in the state finals. And the first two faces the Monarchs saw coming off the diamond that day were Delaney & Emma. The two will, undoubtedly, be there again in Hastings this week to help the team finish the job this year.

"We don't know what's going to happen this week," Petersen said. "But still, there's a lot of other things that sports and athletics brings us in competition and things like that. Just the camaraderie of being around each other, having Emma & Delaney included, it definitely puts things in perspective."

"I hope we win the championship," Emma said. "I am excited to go to state."

"It's a true friendship like anybody would have," said Teresa. "Disability is just a part of who you are. Just like you can be blond, you can be brunette. You can have Angelman Syndrome. Yes, it can bring some extra challenges but I think the girls do an amazing job in treating them as any teenage friend they would have."