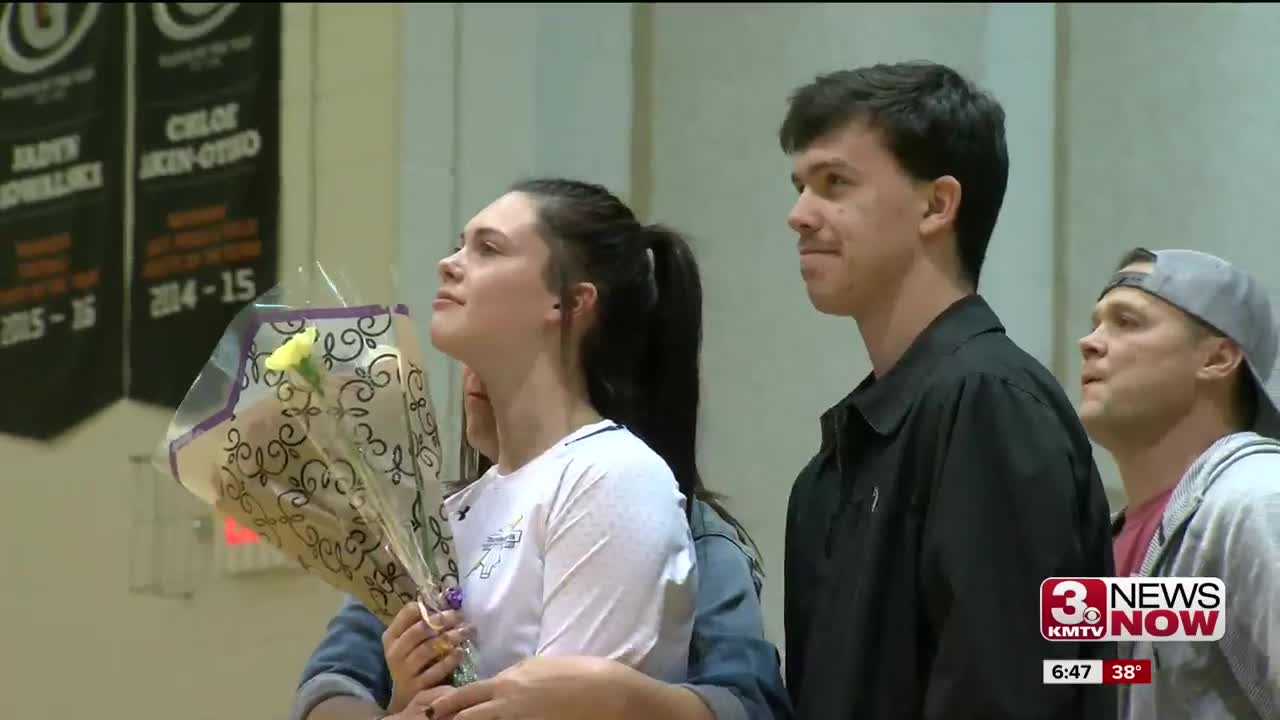 Bellevue West senior Jacki Apel has remained motivated on the volleyball court after the passing of her father.

BELLEVUE, Neb. (KMTV) — Jacki Apel always serves up a smile on the volleyball court. The Bellevue West senior serves her team even better.

"She's there for her teammates at any cost," said head coach Christian Krajicek. "I just love her."

"I think, honestly, she gets it from her father," said Jacki's mother, Nicole. "She's always been goal-oriented."

"We always use to play together," said Jacki about her father. "He definitely made me who I am today."

Jacki's father, Brad, served in the Air Force & made several deployments overseas while Jacki & her brother were growing up, forcing him to miss many of her matches.

"I just loved seeing him there when he could come," Jacki said. "He always told me to pursue what I wanted to do and his dream for me was to go to college to pursue volleyball."

In January of 2018, Brad was diagnosed with liver cancer. At the time, doctors thought he could beat it. But then that July, just days after Jacki's 16th birthday, the prognosis suddenly changed.

"They told him that he only had a couple months to live and we had thought he was getting better but didn't unfortunately," said Nicole.

Jacki would visit her dad nearly every day after school until September 30th, 2018 when Master Sergeant William Bradley Apel passed away at the age of 45.

"It was devastating," Nicole said. "I'd been married to him for 27 years. He was all that I knew."

"It definitely effected how I played just because that was always on my mind," Jacki said.

"None of our girls had lost somebody that close to them," said Coach Krajicek. "Just seeing how all them came together and were there to support her, it was a really special moment but it was really hard for all of us."

While Jacki's had plenty of up and down days on the court since, one of the toughest might have come earlier this month on her Senior Night, when her dad's picture appeared on the video board.

"One of the first thoughts to my mom was dad would be so proud of me," said Jacki. "I just wish he was here to see it."

"It was very sombering because he would have wanted to be there for her for this special day," said Nicole.

Jacki's playing days, however, won't come to an end this fall as she's earned the chance to play collegiately starting next year at Bellevue University.

"I feel like I go out there with more passion," Jacki said. "I want to work harder."

"I know he's looking down on her," said Nicole. "And just extremely proud of her just rooting her on."