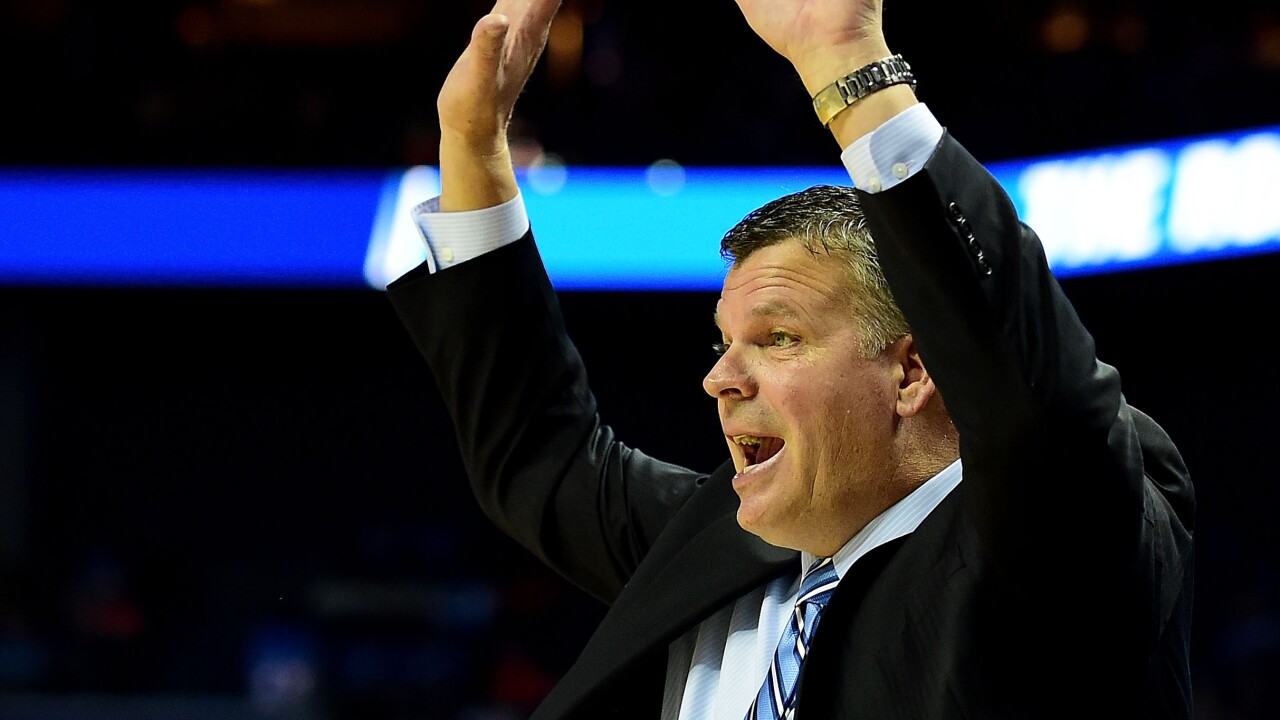 Powered by an unbelievable shooting night from sophomore Mitch Ballock, 11-of-12 from beyond the arc that yielded a career-high 39 points, the Creighton men's basketball team defeated DePaul 91-78 on Saturday, March 9. The win pushed Creighton to 18-13 on the season and 9-9 in BIG EAST play, while DePaul closed the regular season at 15-14 overall and 7-11 in conference play.

📽️ Mitch Ballock 🔋 would not be denied en route to a school record, a BIG EAST record and an NCAA record when it came to three-pointers!#GoJays pic.twitter.com/kWtpO78OcL

The game couldn't have started much better for the Bluejays as Creighton raced out to a 16-2 lead and never trailed. Creighton turned to its big man Martin Krampelj early as the junior from Slovenia scored the first seven points of the game. Ballock dropped in a layup to push Creighton's advantage to 9-0 in the first four minutes. After DePaul got on the board, Ballock answered with the first of 11 trifectas beyond the arc. Buckets from Ty-Shon Alexander and Christian Bishop gave the Bluejays their 16-2 lead.

Over the following eight minutes, DePaul made an adjustment to push the ball into the paint. The result was a closure of the gap as the Blue Demons cut it to four at 26-22 and again at 28-24. Each time DePaul made it a two possession game, the Bluejays went inside for a dunk from Krampelj or Bishop. While the bigs were scoring down low, Ballock took advantage with five treys from long range in the half.

Holding a 30-25 edge with just over four minutes left, Ballock knocked down his third trey as Creighton pushed lead back to double-digits at 38-28 and took a 41-34 edge into halftime. Ballock and Krampeljfinished the opening period with a combined 31 points, Ballock's 17 points was the largest first half the Kansas native has delivered in a Bluejay uniform, and just a glimpse of what was in store for the second half.

While Ballock's first half was special, his second half was even better. After going 6-for-6 from the field in the opening 20 minutes, Ballock was 6-for-8 from the field, including 6-for-7 from beyond the arc in the final 20 minutes.

Early in the second half Ballock and Krampelj continued to keep the Blue Demons at bay with 12 of Creighton's first 17 points in the second half. Despite the best efforts of the Bluejays dynamic duo, DePaul continued to claw back into the game, closing Creighton's lead to as little as three points at 66-63 with 9:17 left in the contest. Creighton delivered the knockout blow over the ensuing four minutes with a 16-6 burst. Krampelj got things started once more with an interior bucket. Following a defensive stop senior Kaleb Joseph connected from long range to make it 71-63. DePaul tried to answer with a trey from Eli Cain, but Ballock responded for Creighton with a pair of triples as well as three from the charity stripe to push Creighton's lead out to 82-69 with 4:56 left.

The Bluejays went on to claim their fifth straight BIG EAST win to close the regular season. Ballock's 39 points led all scorers, while Krampelj finished with seventh double-double of the season with 23 points and 10 rebounds. DePaul got a team-high 19 points from both Eli Cain and Max Strus in the loss.

The Bluejays return to the hardwood on Thursday, March 14 as the fifth-seeded Bluejays will face No. 4 Xavier at 2:30 p.m. at the BIG EAST Tournament presented by Jeep.

NOTES: Ballock's 11-12 from beyond the arc (91.7%) ranks as the NCAA highest percentage from long range with at least 12 attempts in a single game ... Ballock's 39 points are the most by a Bluejay since Doug McDermott delivered 45 points on March 8, 2014 in a Senior Day battle with Providence ... Ballock's 11 treys set a Creighton record, breaking the mark of nine that was held by both Ethan Wragge and Kyle Korver ... Marcus Zegarowski finished with a career-high 10 assists, a season-high for any Bluejay in 2018-19 ... Martin Krampelj had second straight double-double ... Ty-Shon Alexander's school-record 33-game streak with a three-pointer was snapped, as the sophomore was 0-for-4 from long-range and finished with eight points ... Creighton has won a season-long five straight games, the longest active streak in the BIG EAST, and the 20th time in the last 22 seasons it has had at least one streak that lengthy ... Creighton has won three straight regular-season games in the same month of March for the first time since 1931-32 ... Creighton has trailed for a total of 19 seconds in its last four Senior Day's ... Creighton has won 10 straight games over DePaul, with nine of those coming by double-figures ... Creighton has now made a three-pointer in 847 straight games, a three-pointer before half in 218 consecutive games and at least five trifectas in 67 straight contests ... Mitch Ballock now owns 86 three-pointers this season, the eighth-most in Creighton single-season history ... Marquette's Markus Howard owned the previous BIG EAST record with 11 three-pointers in one game, having done so last year at Providence ... Picked ninth in the preseason poll, Creighton finished tied for third in the final BIG EAST standings.