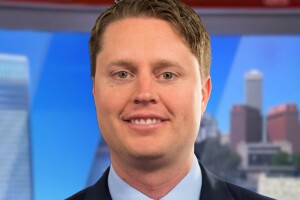 Meteorologist Mark Stitz joined the 3 News Now Weather Alert Team in December 2017. He is excited to be back in the Midwest with its warm summers and snow-filled winters!

Mark grew up in Canton, Ohio, home to the Pro Football Hall of Fame. He stayed in Ohio for college, earning his meteorology degree from The Ohio State University.

After enduring many cold and snowy winters in Ohio, Mark moved south, accepting his first TV job in San Angelo, Texas. He spent nearly four years there forecasting the high heat and the severe storms caused by the dry line, a common feature in the Southern Plains separating the dry desert air from the moist Gulf of Mexico air.

While in Texas, Mark earned the designation of Certified Broadcast Meteorologist from the American Meteorological Society. The AMS grants the CBM designation to broadcast meteorologists who meet established criteria for scientific competence and effective communication skills in their weather presentations.

Mark then moved to Lexington, Kentucky, known for its thoroughbred horse farms and bourbon. He spent more than two years there forecasting the weather he grew up with, including spring storms and winter snow.

He then moved back south, working in Baton Rouge, Louisiana. Even though this time included the very active 2017 hurricane season, the most impactful weather events there were not from named storms. Mark was on air for hours helping to track the tornadoes in the outbreaks of February 2016 and February 2017. Baton Rouge and surrounding cities also experienced historic flooding in August 2016 after more than 20 inches of rain fell.